Get a new helmet. Mid Anglia Microlights instructor Gary Taylor on the day he realised it was time to put a lid on the past

Gary Taylor on the day he realised it was time to put a lid on the past
It was just a normal day, until suddenly it wasn’t.

There we were, tootling along merrily on my student’s first dual navex and almost at the end of the return leg to Beccles when I leaned out to look at something below.

The wind got under my visor, and I felt the strap coming undone and the helmet lifting away from my head.

Quick as a flash, I grabbed it with both hands and fumbled around for the strap.
I explained the situation to my student, who found it most amusing, and it didn’t stop him pulling off a flawless landing.

Crisis averted, but inspecting my venerable Air Zone helmet, it became obvious that the Velcro securing the strap had become very worn and clogged with fluff.

Time to invest in a new helmet, but which one? I’d always fancied an integrated helmet, and I’d recently checked out a student in his QuikR and been very impressed with the quality and clarity of his Flycom set up.

I was vaguely aware that Flycom had been sold and now came under the umbrella of MEL Aviation, a British-owned group of companies which manufactures and maintains aviation components for the civil and military market worldwide.

A quick search on the internet revealed that Flycom was only 40 miles away in Sudbury, Suffolk, and when I called them, they invited me to fly over and take a look round the factory, since there was a small strip nearby. 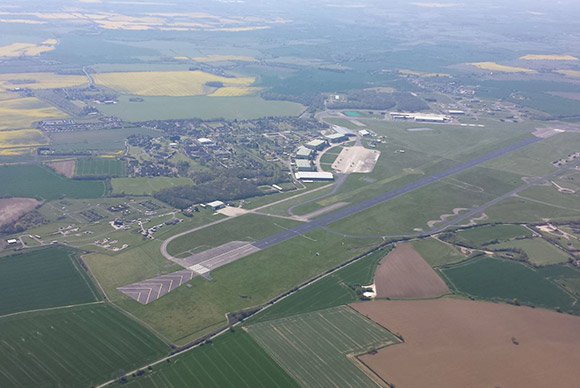 Well, who could resist an invitation like that, especially as my route would take me straight through the RAF Wattisham overhead, home to the menacing Apache helicopters of the Army Air Corps.

On the day, Wattisham Radar was excellent, allowing my transit without demur, and I was met at the airfield and taken to the factory by Lewis Wadley, the 18-year-old grandson of the founder of MEL Aviation and one of the technicians who builds and maintains every aspect of the Flycom range. No silver spoons at MEL, it seems!

I hadn’t quite known what to expect, but Flycom is evidently much removed from its cottage industry beginnings.

Its production area is in a corner of the MEL factory, and everything is laid out in a very logical and precise manner.

Lewis showed me the shell of the helmet which would become mine, then ran me through the build process. Every helmet is hand-built, taking one man approximately two hours to complete. 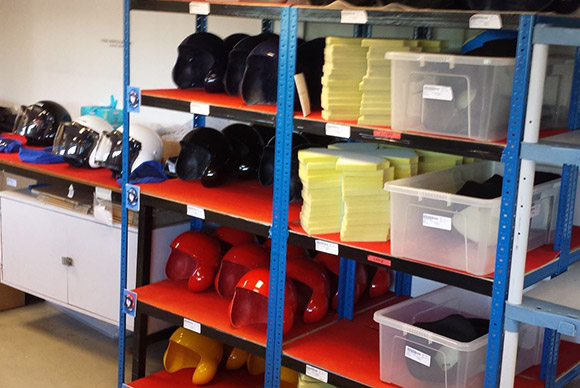 I was pleased to see that the chin strap is a sturdy click-lock type of affair, firmly riveted in place and with no Velcro to clog with fluffy bits. I’d specified a white helmet, but on the shelves around me I could see bare shells in red, blue, yellow and black. They also do limited editions in other colours from time to time, so there should be something to suit everybody’s taste.
Watching the build, there’s no obvious way to automate the process: it requires a number of skills, so there’s much taping, glueing, soldering, heat shrinking and riveting. As Lewis worked on my helmet, his colleague Taylor Roloff was building various components in batches for economy of effort. 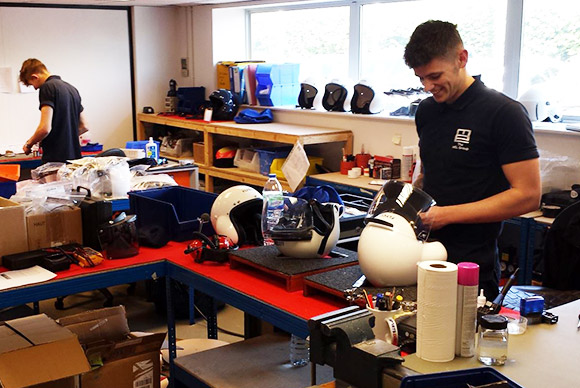 Every item from the build is logged, and once complete, each helmet is given a unique serial number, so the company now knows not only when your helmet was built, but who built it.
I was surprised to learn that it also has a service centre in North America. It ships a lot of units to Canada and the US and when I visited, was flat out trying to keep pace with demand, which bodes well for the future of the company.

Students have commented how much clearer I sound, and it’s also far more comfortable to wear

The guys at Flycom very kindly supplied me with an adapter to interface with my legacy comms equipment, and now I’ve had chance to get used to it I can honestly say the contrast between my old separate headset and helmet and the new integrated helmet is a revelation.
Students have commented how much clearer I sound, and it’s also far more comfortable to wear, which is an important consideration for anyone, particularly an instructor.

I’m genuinely very pleased with my new helmet. It was fascinating to watch it being made, and I look forward to years of instructing in it.

(with kind permission of BMAA)

We use cookies to ensure that we give you the best experience on our website. If you continue to use this site we will assume that you are happy with it.Accept AllPrivacy policy